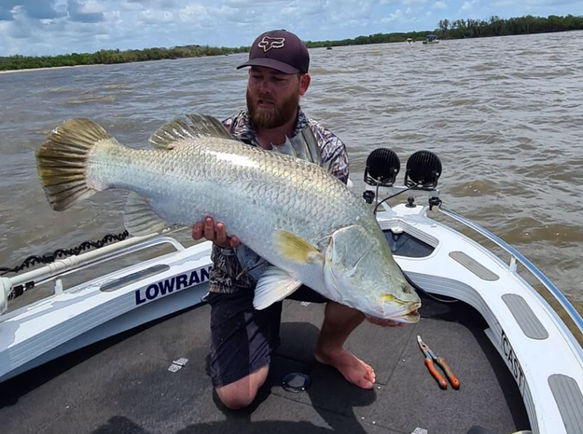 Chris Bates with the 100cm barramundi at the Sampan Creek, March 2021.

The build-up time is great for sweating, storms and breeding barramundi…

As part of the barramundi research tagging program, AFANT recently received a report from fisher Artem Li of a tagged fish recapture in the Chambers Bay area.  After checking our records, we were interested to find that this was the second recapture for this fish, having been recaptured earlier this year by Chris Bates at the Sampan Creek.

This fish had first been tagged in June 2020 by Fisheries NT scientists in the Mary River Bridge Lagoon at 91cm.  With the 2020/21 wet season connectivity, the fish was able to swim over 100km downstream to the mouth of the river where it was captured by Chris in March 2021 at the magic meter mark (100cm).  The fish had grown 9cm in the 275 days since it was tagged.

In October this year, 238 days later, the fish was recaptured again, this time by Artem.  It had grown three centimetres in the seven months since the previous recapture. A total growth of 12cm since it was first tagged in June last year (513 days), taking it to 103cm!

Barramundi are a catadromous fish which means they begin life in saltwater environments and return there to breed but their lifecycle can include freshwater, estuarine and marine phases. In the Top End wet season (October to April), sexually mature adults migrate from freshwater to coastal estuaries and river mouths to spawn (release sperm and eggs). Barramundi are protandrous hermaphrodites, meaning they change sex from male to female.

Spawning usually takes place when tidal activity is strongest, and a large female can produce up to 32 million eggs during the spawning season.  Barramundi are placed second in the world for the fish with highest egg production!

After a few days, juvenile barramundi start to feed on plankton and once they grow bigger can then migrate into rivers and freshwater billabongs, where they develop into adults over the next three to four years.

Research in the NT has also shown that some barramundi never leave the saltwater (or estuarine) environment and likewise, some never leave the freshwater after their first migration.  At the AFANT AGM in November, CDU PhD candidate Brien Roberts presented his research on the ecological drivers of barramundi migration in the Top End.  His research showed that the timing of the sex-switching in barramundi is more related to size than age.

“Most barra start their lives as males, then switch to being female later in life – that’s why most of the big ‘meterys’ are female,” Mr Roberts said.

“These big females are by far the most valuable breeders in the population. There’s limited evolutionary benefit to being a small female barramundi, because a larger female can produce a greater number of eggs, and will be much more successful at passing on her genes.”* 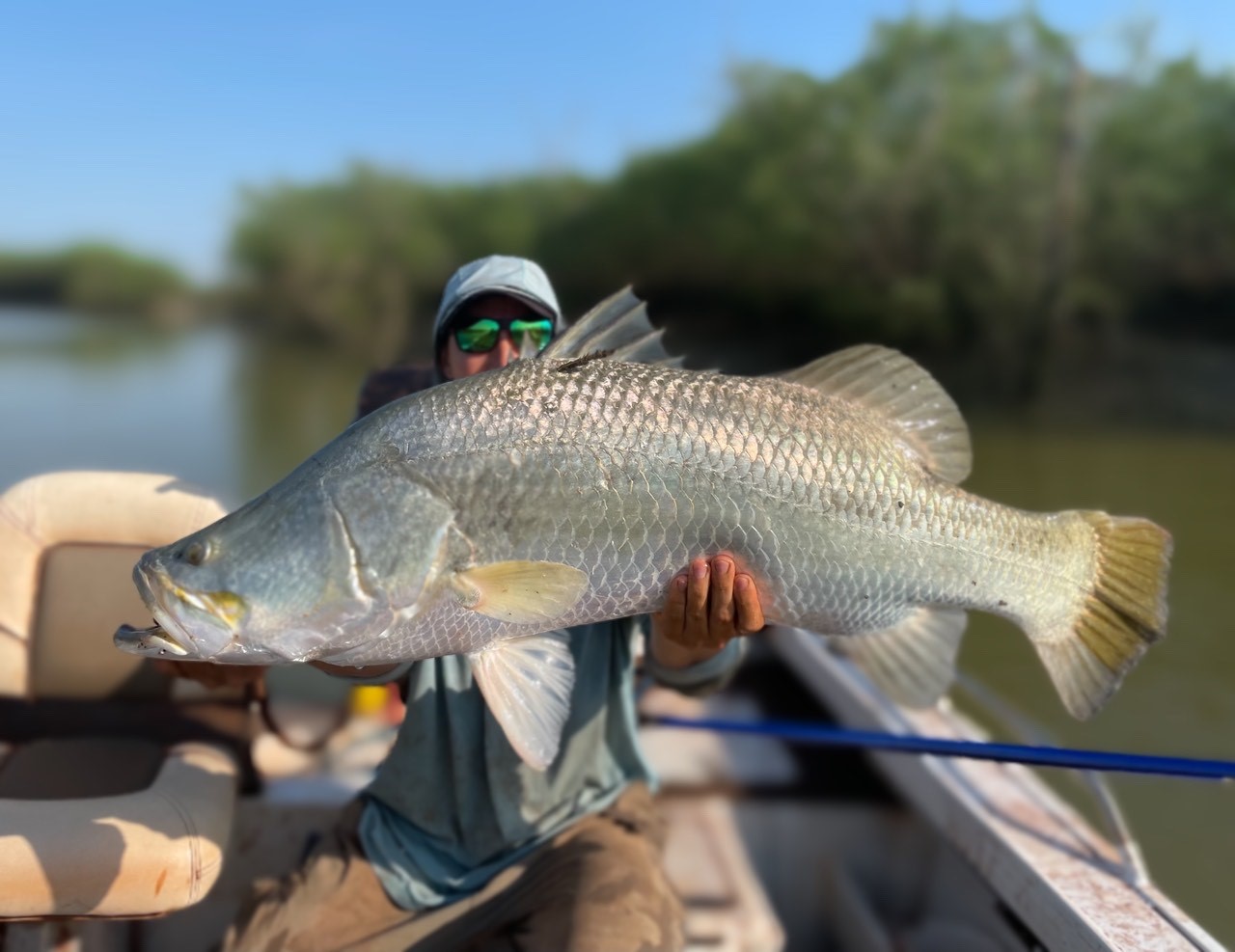 Artem Li with the 103cm barramundi in Chambers Bay, October 2021.

Based on what we understand about the barramundi lifecycle from the CDU research, we can guess that our tagged fish may have changed to female once it reached size in the Mary River Bridge Lagoon.  It then travelled down the Mary River to the saltwater environment during the wet season floods to join the spawning population. Interestingly, given this fish reached 91cm in the freshwater, it may have skipped spawning as a male and may have only ever bred as female fish.

After briefly meeting both Chris and Artem, we hope this big breeder goes on to produce many millions of eggs and ultimately more big barras!

We thank Chris and Artem for contributing to the barramundi research tagging program and also CDU PhD Candidate Brien Roberts for his research presentation.