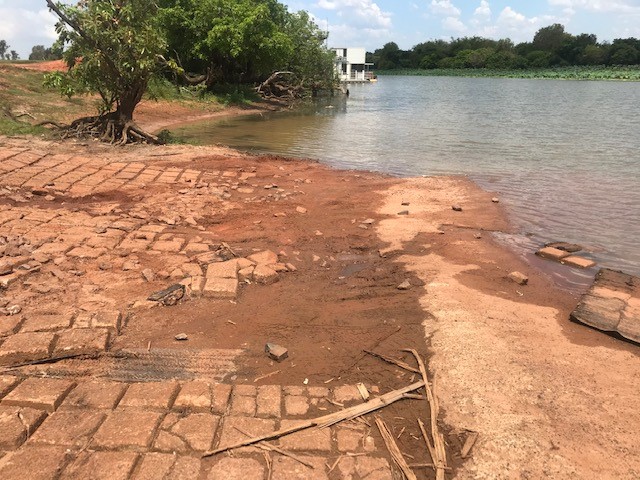 With regular reports of damage to boats and trailers, and increasing concerns over crocodile attack following near misses, the Amateur Fishermen’s Association of the NT (AFANT), says the Government must not delay any further and must repair or replace the popular Top End boat ramp immediately.

The condition of the ageing Corroboree Billabong ramp has been steadily deteriorating, with sections of the ramp foundation collapsing and deep ruts forming in the paved surface. The issue has now reached crisis point after the Government missed a unique window of opportunity for repairs last year. At that time, the billabong had dropped to lower than usual levels following the poor wet season and seemingly presented the opportunity for a lower-cost remedy.

Last dry season AFANT urged the Government to take advantage of the low water conditions that left most of the ramp exposed and called for lasting ramp repairs, earthworks and the installation of a passenger loading pontoon to address ongoing safety concerns. Despite constructive dialogue with government staffers, the opportunity was missed and ever since, AFANT has been liaising regularly with the Northern Territory Government, reporting incidents, ramp condition, water levels and urging for works to be carried out as a top priority.

AFANT have tried to help communicate with competition organisers, fishing clubs and the broader community to best work around the issues at the ramp, however workarounds have mostly become ineffective, and launching at the ramp has become more dangerous. Reports of serious damage to boats, motors and trailers, have been increasingly accompanied by reports of people nearly falling into the water and crocodiles stalking fishers who have waded in to try to dislodge their stranded vessels.

“We call on the Northern Territory Government to put people’s safety first, to replace this popular boat ramp, and upgrade it with a design that is fit for purpose.

“While we welcome the investment in recent years to seal most of the road to Corroboree Billabong, the ramp needs to be rebuilt and there needs to be a pontoon installed so skippers and passengers aren’t routinely vulnerable to crocodile attack

“Unfortunately, I am certain it is no longer a matter of if, but when, someone will be seriously injured at the Corroboree Billabong ramp and it’s not good enough

“We have heard of passengers nearly falling into the water when boats or trailers suddenly strike the uneven surface of the ramp, and we are aware of multiple occasions where large crocodiles have made a beeline for fishers who have waded in to attempt to dislodge their stranded vessels

“The damage to people’s boats and trailers is surely now running into the tens-of-thousands of dollars, and this cost is being met by individuals through no fault of their own”

In a win for our community, AFANT have just been informed by DIPL and the Minister for Recreational Fishing that repairs to the damaged Corroboree Boat Ramp have been approved, with work to begin on Tuesday October 19. The ramp will be closed for 7-10 days while repairs take place.

AFANT, along with our members and others in the fishing community have been working hard to raise awareness of this issue and to secure a commitment for repairs to this very important infrastructure.

Advocacy has included liaising regularly with NT Infrastructure, Planning and Logistics staff and meeting with Recreational Fishing Minister Paul Kirby: Member for Port Darwin who was supportive the need approve repairs before the wet arrived. Today we issued this media release: https://afant.com.au/media-release-fishers-call-on…/

While the condition of the ramp should never have got to this stage, the developments being announced are most welcome and will improve safety and amenity for the many recreational fishers who love to go fishing at Corroboree Billabong.

The following statement has been received from the Minister for Recreational Fishing: