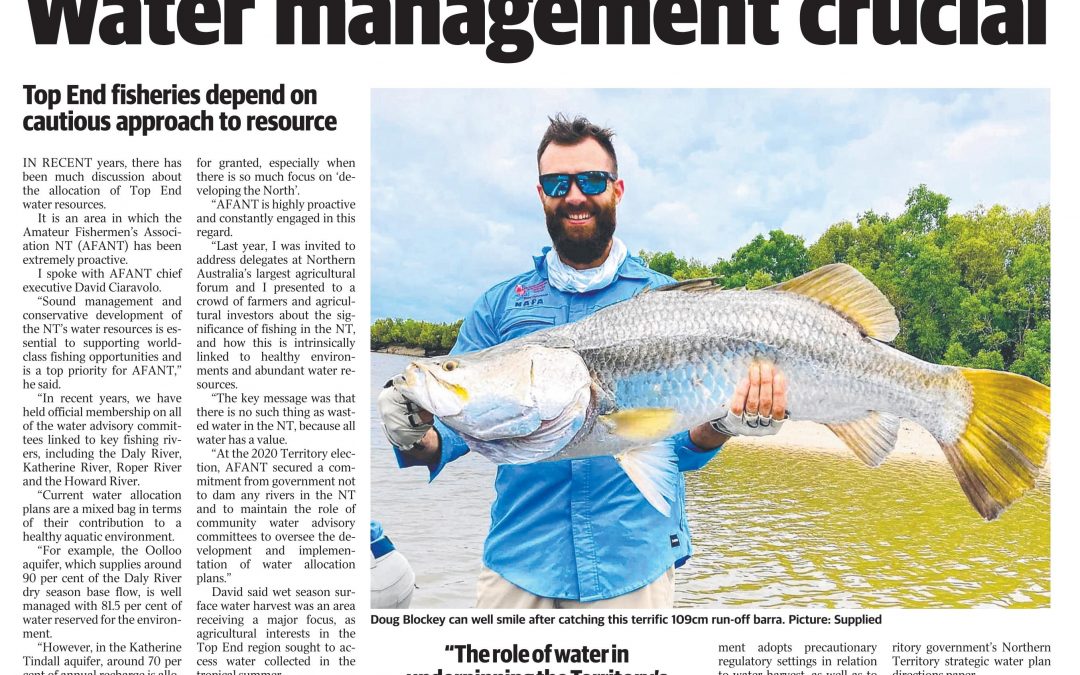 lN RECENT years, there has been much discussion about the allocation of Top End water resources.

It is an area in which the Amateur Fishermen’s Association NT (AFANT) has been extremely proactive.

“Sound management and conservative development of the NT’s water resources is essential to supporting world-class fishing opportunities and is a top priority for AFANT,” he said.

“In recent years, we have held official membership on all of the water advisory committees linked to key fishing rivers, including the Daly River, Katherine River, Roper River and the Howard River.

“Current water allocation plans are a mixed bag in terms of their contribution to a healthy aquatic environment.

“For example, the Oolloo aquifer, which supplies around 90 per cent of the Daly River dry season base flow, is well managed with 81.5 per cent of water reserved for the environment.

“However, in the Katherine Tindall aquifer, around 70 per cent of annual recharge is allocated for extraction due to historical decisions to hand out generous water licences.

“While presently only around 50 per cent of the Katherine allocation is actually used, the current levels of entitlements are not based on science, or precaution, and present a threat to the health of the Katherine River.

“While most of our rivers are only impacted by low levels of water extraction compared with down south, we cannot take our environmental health for granted, especially when there is so much focus on ‘developing the North’.

“AFANT is highly proactive and constantly engaged in this regard.

“Last year, l was invited to address delegates at Northern Australia’s largest agricultural forum and I presented to a crowd of farmers and agricultural investors about the significance of fishing in the NT, and how this is intrinsically linked to healthy environments and abundant water re-sources.

“The key message was that there is no such thing as wasted water in the NT, because all water has a value.

“At the 2020 Territory election, AFANT secured a commitment from government not to dam any rivers in the NT and to maintain the role of community water advisory committees to oversee the development and implementation of water allocation plans.”

“The same wet season floods and river flows drive the productivity of many Top End fisheries, none more so than the barramundi fishery,” he said.

AFANT believes a surface water harvesting policy is urgently needed for the Top End because the current water allocation planning framework provides that up to 20 per cent of water could be harvested.

“Research suggests that wet season harvest of 10 per cent of water would start to show negative impacts on the eco-system, especially on species like barramundi that depend on freshwater flows and high levels of ecosystem connectivity,” David said.

“For this reason, AFANT has argued for a highly precautionary approach should any surface water extraction be allowed in the future.

There has been considerble focus on cotton as a crop, and it is clear that many fishers do not want to see large areas of cotton grown in the NT.

“There is a fear that a profit motive could result in severe impacts to key catchments, as well as habitat degradation.

“Whether for cotton or any other crop, our approach must be very much focused on helping to ensure that the government adopts precautionary regulatory settings in relation to water harvest, as well as to land clearing and habitat connectivity.

“It is essential to recognise that, despite a lot of rhetoric from down south, there is no such thing as wasted water in the Top End – all water has a value to the environment and every drop we divert away from our iconic flood plains, catchments and fisheries must be justified in social and economic terms.”

I understand that, in recent weeks, AFANT has been completing its response to the Territory government’s Northern Territory strategic water plan directions paper.

lts submission highlights the role of water in underpinning the Territory’s iconic, world-class fisheries and their social, cultural and economic values.

Hopefully, the NT government will listen and commit unequivocally to the precautionary management of the Top End’s water resources, while ensuring improved transparency and accountability when it comes to all decisions relating to water allocation and planning.